I hope that the effect of my work is mostly physical. That’s what I like — walking through something, having an experience of the weight of things, or an experience of balance… That kind of really basic physical thing makes the work interesting; it makes it disarming and strange. 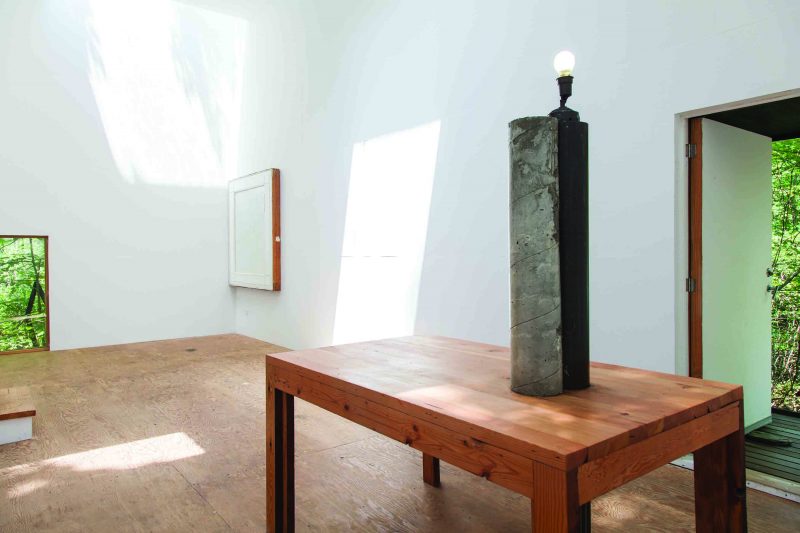 On the ‘T’ Space grounds, Tuazon installed a large metal piece. In the exhibition space, he showed smaller works incorporating wooden tables, metal columns, working light fixtures, live plants, and more. Tuazon says in his catalogue statement that he sees each of his tabletops at the scale of “a landscape with an object in it, on it, through it.” Yet, he adds, these works are “functional tables, too.” Rendering scale flexible, he encourages our responses to be limber—in other words, unconfined by familiar expectations and well-worn paths of perception.

Built of curving rods, corrugated steel sheets, and cantilevered beams, Tuazon’s outdoor work reaches into the surrounding space even as it gathers a portion of that space into its wide-open interior. A balance is achieved, bringing with it a sense of completion. Yet this work also has the feel of a work in progress, an object rife with further possibilities for interaction with its site as well as its audience. And so it meshes with the spirit of ‘T’ Space, which ever since it presented its first exhibition in 2010 has encouraged the intermingling of art and architecture, poetry and music. A native of the West Coast, Tuazon has often collaborated with San Francisco poet Cedar Sigo, who read a selection of his work on the occasion of his friend’s opening at ‘T’ Space. In addition, Brooklyn based artist-musician Lea Bertucci played electroacoustic bass clarinet.